The Risk from the Vesuvius. 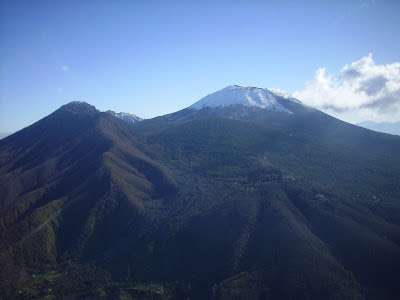 “The Risk from the Vesuvius” by MalKo

In the month of December 2008, two military jets exceeded the speed of sound whle flying over Naples producing a bang that caused considerable anxiety on the part of many inhabitants. As is well known, the larger Neapolitan metropolitan area is at serious risk from a volcanic eruption of Vesuvius. In August 2007, the institutional and scientific world was shaken by an article in the prestigious magazine The National Geographic which reported the conclusions of a study carried out by foreign and Italian  researchers, including Professor Giuseppe Mastrolorenzo of the Vesuvius Observatory.
The authors emphasised the fact that a potential resumption of volcanic activity could take place in the form of an Avellino type plinian eruption in which eventuality it is unlikely that the city of Naples would escape unharmed.
Clearly, whoever sustains this theory indirectly and backed by scientific analysis, challenges the validity of the national emergency plan which has never considered the city of Naples as being more than a potentially marginal target of the eruption.
The reaction of the Department of Civil Protection was piqued, due to the fact that the eruptive scenario taken as reference point for the drawing up of the emergency plan, was the subplinian eruption of 1631 which though seriously affecting the Vesuvius region did not touch the urban centre of Naples.
It should be remembered that the geological history of the Vesuvius demonstrates an ample variety of eruptive typology ranging from picturesque lava flows to catastrophic eruptions characterised by lethal burning clouds.
Unfortunately, it is not always possible to predict well in advance the reawakening of a quiescent volcano; furthermore, the type of eruption determines its energy level and consequent danger.
In general, volcanoes exhibit a series of symptoms before producing an eruption that can usually be identified as soon as they appear, especially, as in our case, when constant controls are carried out with modern technological methods.
As regards the varying theories about the next eruption of the Vesuvius, they are all of equal merit given that there are no mathematical and incontrovertible certainties on the subject.
Only the next eruption (who knows when) will be able to demonstrate which theories are correct from a statistical/forecasting point of view. A well-known vulcanologist wisely said in an interview that the premonitory signs of the eruption of Vesuvius will all be recognised and understood, but after the eruption.
The scientific dispute is principally about the type of eruption, but when this will take place (in the long term) no-one is able to establish.
In the  preliminary national emergence plan published in 1995 there was notable optimism about the  short forecast time of the eruption: seven days time to get away to safety out of a total of 20 days available. In the revision of the plan dated 2001 one week was confirmed. Today, some anticipations of the press claim that the present emergency plan being drafted has decreased the time of the total evacuation of the red zone to three days. In the Official Bulletin of the Campania Region n. 20 of April 26, 2004, evacuation in 48 hours was envisaged.
The director of the regional school of civil protection in Campania, in an article published in the Corriere del Mezzogiorno of October 9, 2008 claimed that within two months the new and definitive emergency planfor the Vesuvius area, drawn up with the the technicians of the department of civil protection, would finally see the light. There is presently a year’s delay in the publication; a relative delay, in reality, given that one is talking about years not months and  that the commission charged with drafting the famous  plan has been in office since 1993. After 16 years therefore, we are still bogged down and waiting for a valid and operative emergency plan.
In the end, it is abundantly clear that any emergency plan for the Vesuvius area must be elaborated using the data for the short-term forecast. And now we come to the problem, that we cannot evade the limitation: we draw up a plan by planning to plan…  Emergency plans, however, must be based on the forecast of the forecast. It is not our shortcoming, but rather an objective limitation of the research in this field.
The emergency evacuation plan to draw up in the face of the threat from an eruption of Vesuvius represents, in terms of prevention, the mediation between two impossibities. One is to move the Vesuvius (the danger) away or to render it quiescent for all time, while the other is to move the six hundred thousand inhabitants (the value at risk) to the red zone. The second way would be much more feasible, above all if we are referring to a substantial reduction in the number of inhabitants (it would not be necessary to desertify the area); it is clear that the realisation of such a plan of delocalisation would probably necessitate a long period of time measurable in decades. A huge problem, however, is to reach political and administrative agreements that will allow pianification to continue irrespective of  changes of power in local government.
(to be continued)
Translation by Lisa Norall
Pubblicato da MalKo Rischio Vesuvio a 12:55