The Risk from the Vesuvius: Is The Merapi like Vesuvius? 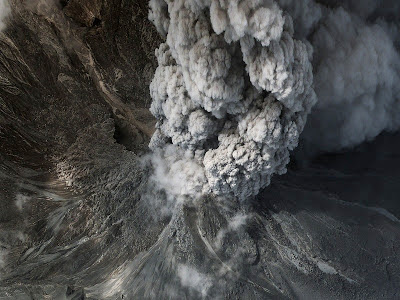 In October 2010, when the eruption of the Merapi had already begun, the Journal of Geophysical Researchpublished a paper written by me together with the volcanologist Lucia Pappalardo of the Ossevatorio Vesuviano, on all the possible eruptive scenarios of the Somma Vesuvius.  We set forth the results of the most advanced numerological simulations applied to volcanology, calling world attention to researchers and the authorities of the necessity of adopting the worse case scenario as the basis for an emergency plan which would be the only way to guarantee the survival of the population at risk in the event of an explosive volcanic event.  We also showed how any other optimistic choice constitutes not only a limit to the efficacity of a preventive protective intervention but also a further cause of risk since it creates an unfounded perception of safety to the community.
d) How soon did the Indonesian authorities order the evacuation of the population living around the volcano?
In the case of the eruption of the Merapi, the first clear precursory phenomena occurred September 1, but the commencement of the eruption was observed, although in a limited way, on September 12.  The evacuation order was given on September 25, more than 40 days after the effective beginning of the eruption and only a day before the beginning of the most intensive explosive phase.  Such a long wait before giving the evacuation order did not cause a disaster on the Merapi only by good luck….whereas such a hazardous decision in the case of the eruption of the Vesuvius would result in a catastrophe since it would obviously be impossible to evacuate millions of inhabitants in the area at risk in a very short period of time.
e) The Merapi like the Vesuvius is on a short list of highly dangerous volcanoes. But what is the most dangerous volcano in the world?
Unfortunately, as I have already underlined in other circumstances, our volcanoes, the Vesuvius and the Phlegraean Fields compete for the title of most dangerous volcano in the world.  This is obviously in relation to normal volcanic activity and the effects on the territory on a regional scale (millions of lives at risk).  In relation to possible planetary catastrophes, events which are little talked about as they take place only every hundreds of thousands of years, without doubt the most dangerous volcano in the world is theYellowstone caldera in the United States which 600,000 years ago erupted well over a hundred thousand cubic miles of magma in a few days with serious consequences for the climate on a global scale.

The figure on the left shows a diagram of the deep structure of the Somma-Vesuvius. The results of a recent study (Lucia Pappalardo and Giuseppe Mastrolorenzo, Earth and Planetary Science  Letters  296 2010, 133-143), indicating the presence at a depth of 6 miles of an extensive phonolitic magma chamber (full of silica and gas) ready to feed any typology eruption not excluding a plinian eruption. 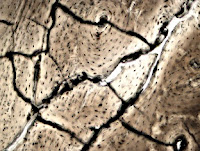 The figure on the left the image of an electron microscope scan of  bone from a victim of the eruption of Pompeii in 79AD.   The micro fractures are caused by the heat from the pyroclastic surge.

(The editors of Hyde Park would like to thank Professor Giuseppe Mastrolorenzo, as always, for kindly giving us his time to clarify scientific questions.)