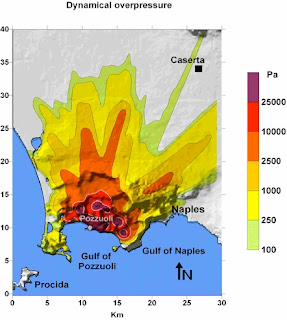 The danger map relative to the dynamical overpressure represents the pressure exerted by a burning cloud on the unity of the surface.  Damage relevant to the structure begins at values above 5 kPa while the value of demolition goes from 10 kPa to 25 kPa depending on the building typology.
Other than the risk connected to pressure is the great danger associated with the high temperature of the clouds (up to 600°C) which they can maintain even at distances greater than 15 kilometres from the eruptive centre. 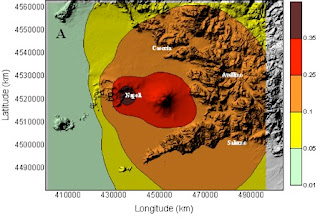 The map on the left shows the danger relative to the fallout, that is to say the deposits that fall back down.  It is evident that for such a type of phenomenon the entire city of Naples would be exposed to a very high risk value.
Both the maps are the result of the combinations of all the events possible obtained by the numerical simulation of thousands of eruptive episodes with diverse properties and probability values.